Who was the most prolific composer in history? That depends; if you take prolific to mean having the most offspring, then J. S. Bach is certainly the clear winner with his twenty odd children. If, on the other hand, you take prolific to mean writing the most music, then Georg Philipp Telemann comes out on top. He wrote so much, in fact, that he once admitted that he had lost track of a large corpus of his opus—which is not unusual for a composer who could write with fluid abandonment. Like Telemann, Franz Schubert once gave a song to a publisher who had it transposed to what the publisher thought was a more convenient key. He showed it to Schubert a day or two later, and Schubert said, “This looks pretty good; who wrote it?” But getting back to Telemann, this German master’s propensity for cranking out music was so great that it has earned him a place in Guinness World Records as the most composed composer in history. No wonder Europe is still suffering from a paper shortage!

Bach wrote somewhere around 212 cantatas and lots of other music besides. Still he found time to father over twenty children. That’s commendable. Telemann wrote more music than anyone can keep track of and still managed to produce eleven children. That’s remarkable. André Philidor, an oboist in Louis XV’s marching band, composed music no one particularly remembers. But, at the age of seventy-two, he married a girl of nineteen and proceeded to present five new petits hautboists to good old Louis—without the aid, we are given to suppose, of a substitute on the marching field or otherwise. That’s amazing!

Marriage then, of course, was more (or maybe less) than the romantic institution it has come to be. When the venerable organist, Dietrich Buxtehude, announced that he was retiring, Handel and Mattheson hightailed it for the northern region of Germany to apply for the post. J. S. Bach, one of Buxtehude’s students, didn’t bother—maybe he knew better—which became apparent once Handel and Mattheson learned that one of the stipulations to getting the job was marrying Buxtehude’s daughter. After taking one look at Miss Buxtehude, Handel and Mattheson beat a hasty retreat.

Later on, Mattheson and Handel fought a duel—swords and all. This time the object of their affections was not a lady but a harpsichord. Fortunately, Mattheson’s sword was deflected by a button on Handel’s coat, and, as a result, we have been left with Messiah ever since.

Meanwhile, back in Leipzig, Telemann turned down the job of Cantor at the Thomaskirche, perhaps because he didn’t want to teach Latin to the choirboys (had he forgotten his declensions?). So the town fathers ended up taking the third man on their list—who else?—J. S. Bach. But Telemann’s life was not a bed of roses in Hamburg. One day he awoke to find that his wife had run off with a Swedish military officer, leaving him the children and a pile of debts as a gratuity. This, of course, would have made the front page of Der Nationaluntersucher had such a publication existed then.

Mattheson went on to write some terribly boring duets and trios for recorders. Buxtehude’s post, is, at last word, still vacant.

Ed. Note: This article first appeared in the April 1984 issue of Quodlibet, the newsletter from the Music Library at California State University, Hayward (now East Bay). 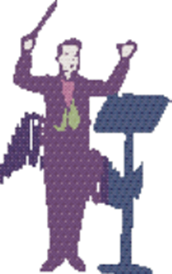 Listed below is the music for the orchestra's next three meetings.  Please note the following:  (1) The selections for the meeting on April 1 have been changed from those announced in the March newsletter.  (2) There will be sectional seating forthe Gabrieli Canzon Noni Toni, with those in Coro Primo on the right as they face the conductor and those in Coro Secondo on the left.  Please observe this seating arrangement when you choose your place at the beginning of the meetings on April 1 and April 22. (3) Sopranino and contrabass recorders as well as bassoon will be needed at all three meetings, bass viola da gamba on April 1 and April 22, great bass recorders and krummhorns on April 22 and April 29 and dulcien on April 29. 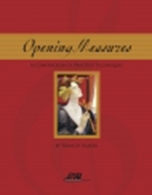 The playlist for the April 1 MPRO rehearsal has been modified by Fred. See Conductor’s Corner in this issue for the revised list.