SONNET FOR WINTER from THE FOUR SEASONS

The musical genius of Antonio Vivaldi (1678-1741) is affirmed by his prodigious output of cantatas, oratorios, and other vocal pieces, operas, sonatas, and concertos for orchestra.  Notable among these concertos is a set known as THE FOUR SEASONS.  To make the performance of this work attractive to the public, Vivaldi added four sonnets, probably written by himself, which functioned as the program.
To celebrate the current season, here is the sonnet for WINTER (translated from the Italian version). the next time you listen to or play this music, think of these words:

Allegro Non Molto
Chilled and shivering in the icy snow
in powerful gusts of bitter wind,
running, ever stamping feet
teeth chattering
because of the bitter chill.

Largo
To pass the days before the fire,
happy and content, while outside
rain drenches well-nigh all.

Allegro
To walk across the ice with tardy tread,
moving carefully for fear of falling.
Run, slip, fall to the ground,
rise, hasten once again across the ice
until it breaks and drifts away; to hear
how from out their iron-clad gates
Scirocco, Borea and all the other winds
rush to the fray.
This is the winter;
and such are its delights. 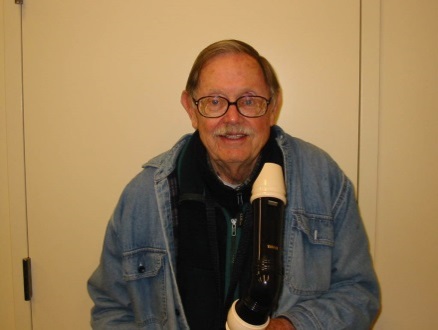 Note from the Editor: Many thanks to Dana for the interesting monthly articles he contributed during the last year and a half. Guest writers are invited to contribute articles for the remainder of the 2014-2015 season. The next issue will be February 2015. Please contact Mary Ann Field.

Listed below is the music for the orchestra's next three meetings.  Please note that there will be sectional seating forthe Gabrieli Canzon Noni Toni, with those in Coro Primo on the right as they face the conductor and those in Coro Secondo on the left.  Please observe this seating arrangement when you choose your place at the beginning of these three meetings. Please note as well that sopranino and contrabass recorders, bass viola da gamba, bassoon and krummhorns will be needed at all three meetings, great bass recorders on February 11 and March 4 and dulcien on February 18. 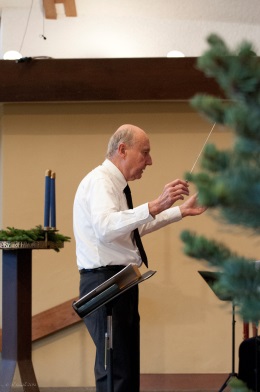 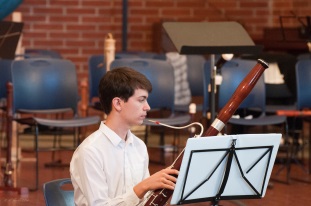 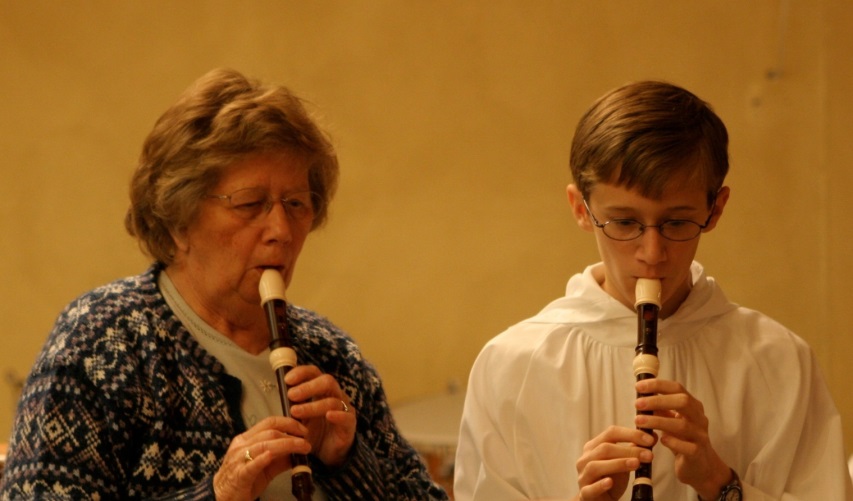 Let me introduce myself and my grandson, Daniel Menche, as new members of MPRO. This is Donna speaking. I grew up in Oakland. My first musical experience was probably hearing my dad sing. He had a trained voice and studied under Merola with San Francisco Opera. I called a piano a “mi, mi,” since I heard my dad doing vocalizes. He would sing, “mi, mi.” I probably started piano lessons when I was in the second or third grade. I was given my grandmother’s violin and was in the school orchestra when I was in fifth grade. I made a lot of friends in the high school early morning orchestra. In my senior year, we decided that it would be fun to be in band. Four of us attended summer school and I took up the clarinet.
During high school, I sang in our church choir and later in my college choir. I took organ lessons in college. I enjoyed getting on the organ bench and learning how to play the pedals. I heard about the Trapp Family Singers but didn’t get introduced to the recorder until my junior in college. I heard someone down the hall in my dorm playing an instrument and couldn’t figure out if it was a clarinet or a flute. I asked about it and later purchased my first recorder. It was an alto. While learning it, I discovered that so much of the fingering was like the clarinet. I originally taught myself by practicing familiar hymns out of my hymnal.

Daniel is my grandson, whom my husband and I have raised from infancy. I introduced him to music by singing to him while rocking him before bedtime. Later we would listen to classical music at night and I would tell him about the music.
Daniel started piano lessons when he was in the second grade and was so excited when he composed a song, music and lyrics, about his pet lizard. He played hand bells in his parochial school and frequently is asked to play in church. Daniel has a very good voice and was selected to join the Ragazzi Boy’s Chorus. These boys are trained not only to sing but are given an excellent music theory class which they must complete. He later took recorder lessons from Carol Panofsky, his music theory teacher.
We are enjoying our experience with MPRO.