SONNET FOR SPRING from THE FOUR SEASONS

THE FOUR SEASONS, Antonio Vivaldi’s best known work, consists of four concertos, each of which was inspired by a season of the year, and each of which has the three-part-form of quick-slow-quick—the composer’s favorite method of composition.  To make the work attractive to the public, Vivaldi provided a sonnet, probably written by himself, for each season.  We saw the sonnet for WINTER in the February 2015 issue of Upbeat. Now we celebrate the coming season with sonnet for SPRING. Perhaps these words (translated from the Italian version) will enhance your listening pleasure the next time you hear Vivaldi’s SPRING from the FOUR SEASONS.

Spring has arrived and the birds greet her festively with joyous song as     streamlets murmur softly beneath her balmy breeze.

Thunder and lightning have been chosen to announce her coming,     throwing an ink-black mantle across the heavens.

And then, when they fall silent, the birds return with charming song.

And now upon the lovely flowering heather, beneath the soft rustle of leafy branches, the shepherd sleeps, his faithful dog beside him.

To the festive sound of rustic bagpipes, nymphs dance with the shepherd

in honor of the spring in all her splendor.

Listed below is the music for the orchestra's next three meetings.  Please note that there will be sectional seating for the Gabrieli Canzon Noni Toni, with those in Coro Primo on the right as they face the conductor and those in Coro Secondo on the left.  Please observe this seating arrangement when you choose your place at the beginning of these three meetings. Please note as well that sopranino and contrabass recorders, bass viola da gamba, bassoon and krummhorns will be needed at all three meetings, great bass recorders on March 4 and April 1 and dulcien on March 25. 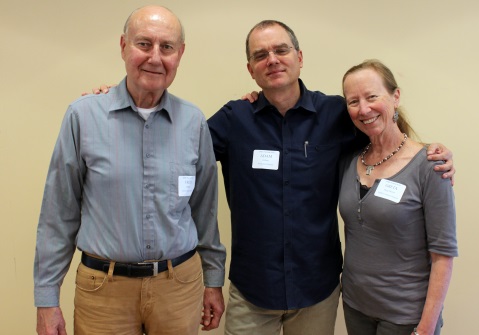 On Saturday, January 31, the Palo Alto, CA based Mid-Peninsula Recorder Orchestra (MPRO), led by Director Fred Palmer and Assistant Director Greta Haug-Hryciw, sponsored a workshop directed by Adam Gilbert entitled: “Villain et Courtoise: Rustic and Bawdy Songs Dressed in Courtly Finery.” The workshop explored how simple popular songs of the late Middle Ages and Renaissance became the basis of elegant courtly love songs, sacred motets, and even masses, using the intricate polyphony of the late 15th and early 16th centuries.   Dr. Gilbert first took one tune, Le Petit Rouen, and showed how it could be used in progressively more complex styles employing typical compositional techniques of the period.  These styles included fauxbourdon, low contratenor, four part with altus, two parts in imitation with a bass, and a complex trio with the descant and bass wandering around the tune in the middle part.

With that thorough introduction, the 52 workshop participants were better able to understand the remaining pieces by composers such as Antoine Busnois, Josquin Desprez, Johannes Stokem, Jean Japart, and Henricus Isaac. Many of these took songs topping the charts of the day, some with bawdy lyrics, and transformed them into sophisticated and often sacred music. The final piece was Dr. Gilbert’s own composition in 15th century style, commissioned by Dan Bloomberg at a fundraising auction benefitting San Francisco Early Music Society workshops. “A Fantasy over Mi Re Re Re Fa Mi Re ‘Irene’s Arête’” was based on the vowels in the name of Dan’s wife, renowned mountain climber Irene Beardsley. The piece was a lovely conclusion to a day full of excellent instruction, gorgeous music and good friends.

Ed. note: ‘Irene’s Arête’ is the name of a challenging ridge in the Grand Tetons of Wyoming, which was first conquered by Irene Beardsley and her climbing partner, John Dietschy.

MARCH IS “PLAY THE RECORDER” MONTH

Recorder players from across North America celebrate March as "Play-the-Recorder Month" (PtRM). Many ARS chapters plan special concerts and presentations to illustrate the versatility and beauty of this wonderful instrument. The third Saturday, March 21, is designated "Recorder Day." ARS is encouraging individuals and chapters around the world to play "Excellentia" by Gary Gazlay. "Excellentia" was awarded honorable mention in the 2014 “ARS is 75!” composition contest. For more information, http://www.americanrecorder.org/2015_play-the-recorder-month.php.